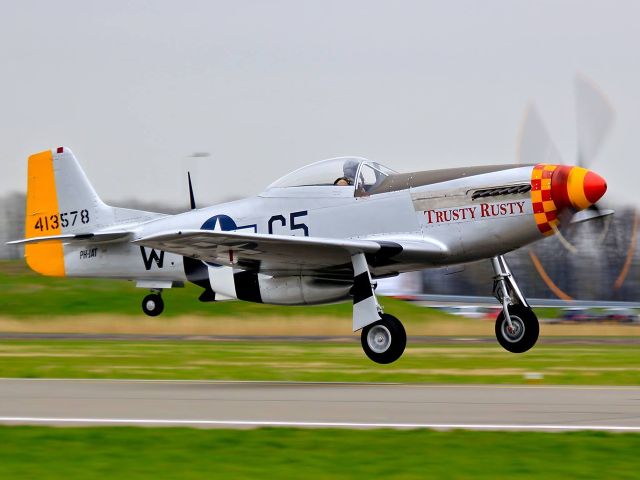 In 1938 the British government investigated the possibility of buying fighter aircraft in the USA and aquired the Harvard trainer from North American Aviation, at the same time asking if they would consider making the Curtiss P-40 to augment output for Britain. Instead NAA set out to build the totally new NA-73 aircraft which later became known as the P-51 ‘Mustang’. The 1944-45 production series differed greatly from the initial series, both technically and esthetically. In modifying the airframe to replace the Allison engine by a Rolls-Royce 60-series ‘Merlin’, the appearance changed drastically to the now so well known silhouette though it no longer had the sleek fuselage of before. Nevertheless the ‘Merlin’ made the Mustang the most versatile fighter performing superbly at all altitudes. The Spitfire and the Hurricane took care that WW-II was not lost but the Mustang made sure that it was won. After the end of hostilities Mustangs were used by a wide variety of air forces and later by private owners as air racers and and as their personal toys. Nowadays Mustangs are treasured around the world by museums and operators of historic aircraft.