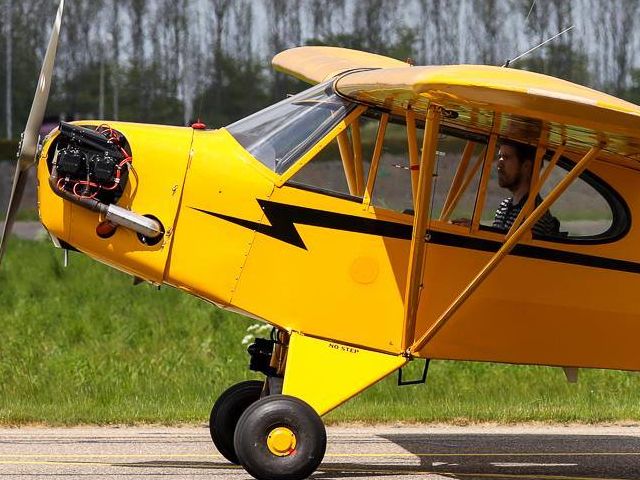 The Piper J-3 Cub is a small lightweight airplane for two people, produced between 1937 and 1947 by Piper Aircraft. The device was originally intended for training pilots, but also became popular among individuals. It is the most famous lightweight airplane of all time and thanks its success to its simple construction and relatively low price. The name ‘Cub’ is English for the Dutch word ‘welp’, the logo of the Piper Cub is therefore a bear cub.The story of the J-3 began in the late 1920s with C. Gilbert and Gordon Taylor, partners in the very small Taylor Brothers Aircraft Company of Rochester, New York. One time barnstormers, the brothers designed and were attempting to market a two-seat monoplane called the Chummy, when Gordon Taylor was killed in a crash. Gilbert Taylor, who believed that there would be a growing market for light planes, moved in 1929 to Bradford, Pennsylvania, where community leaders were anxious to promote new local industries. The Bradford Board of Commerce provided $50,000 to capitalize the new Taylor Company, which built five Chummys before the Great Depression put a halt to construction.

One of the stockholders was an oilman named William T. Piper. Being interested in aviation and believing that the Chummy was too expensive and inefficient, Piper offered to sponsor the development of a small plane to sell for half the Chummy’s $3,985. The resulting aircraft, designated the E-2, was completed in late 1930, and fitted with a two-cylinder Brownbach “Tiger Kitten” engine. Testing had revealed the Tiger Kitten, which was rated at 20 hp, had too little power for the E-2. At full throttle, the small airplane was able only to indulge in ‘grass cutting,” rising a few feet into the air before settling back to earth. However, it motivated Taylor’s accountant to observe that an airplane with a kitten engine should be known as a cub, and a legend was born.

In 1930, the Taylor Company went bankrupt, but Piper bought the assets for $761 and retained Taylor as president. The aircraft received a Continental A-40 engine and became the Taylor E-2, resulting in sales of more than 300. Still not satisfied with the design and acting on owner suggestions, Piper hired Walter Jamouneau in 1935 to improve the aircraft. Jamouneau designed a true cabin by raising the turtle-deck and fairing it into the trailing edge of the wing; he also rounded the wing tips and gave the little plane a curved rudder and fin; the Taylor J-2 emerged. However, Taylor’s objections to the new design led to the break down of his partnership with Piper who then bought out Taylor. Taylor left the company in December 1935 to found Taylorcraft Airplane Company in Ohio. Taylor J-2s were produced at Bradford until the factory burned to the ground in March 1937. Piper moved the company to an old silk factory in Lock Haven, Pennsylvania and began production again in July. In November Piper changed the company name to Piper Aircraft Company and the first Piper J-2 Cub, serial number 1937 (also in NASM’s collection), rolled off the line. In all 1,547 E-2/J-2 Cubs were built from February 1931 through May of 1938.

In late 1937 Piper also introduced the J-3 Cub which did not look much different than the J-2 but featured a stronger steel tube fuselage, larger and upholstered (instead of plywood) seats, and more leg room due to the firewall being moved forward and the clean up of cables and controls throughout the cabin, along with many small improvements. Brakes were soon added too. Powered by 40-hp Continental, Lycoming, or Franklin engines, the J-3 sold for $1,300. Engine horsepower was soon raised to fifty and reached sixty-five by 1940. Piper also standardized the color scheme to Lock Haven Yellow, an orange-yellow later replaced by the lighter Piper Cub yellow with black trim.

In 1940, 3,016 Cubs were built and at the wartime peak a new J-3 emerged from the factory every twenty minutes. Seventy-five percent of all pilots in the CPTP were trained on Cubs, many going on to more advanced training in the military.

Cubs were also flown during the war as observation, liaison, and ambulance airplanes. Known variously as the L-4, 0-59, and NE-1, they rendered valuable service and were nicknamed “Grasshoppers.” By 1947, when production ended, 19,888 Piper Cubs had been built. The J-3 is now finding an ever-increasing popularity among antique airplane owners, and brand new Cubs are being constructed by homebuilders. Both an excellent trainer and a delightful sport plane, it lends itself to lazy summer afternoons. The Cub might best be summed up by the words “simple” “economical” and above all, “slow.”