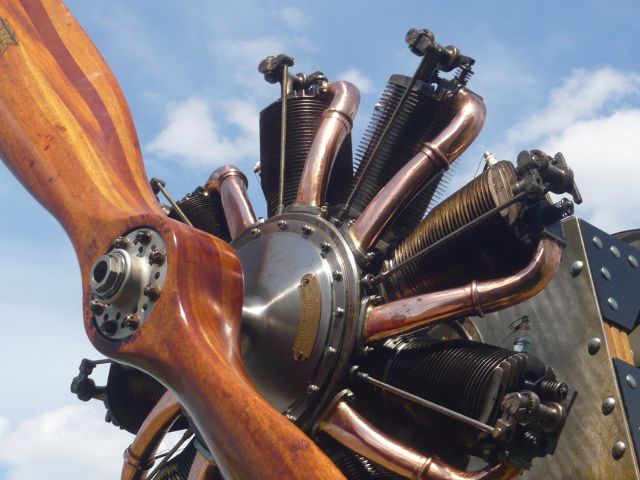 Rotatary engines were very common powerplants in early aircraft, mainly because of their excellent power-to-weight ratio. Invented bij the French Seguin brothers, these engines were used in several countries. Throughout the First World War many French, British and American, as well as German, aircraft were powered by rotaries. The latter three countries had licensees produce the engines, but to a very high standard. It was not uncommon for a salvage party which recovered useable parts from crashed aircraft, to find engines with parts of the opponent. Even Early Birds technicians have restored French engines which had cylinders with German factory markings on them.

Flying rotary powered aircraft is different from what one is used to in normal aircraft. The effects caused by the rapidly spinning engine, called precession, are very noticable. Every steering input is immediately ‘translated’ into a reaction in a different direction; if the pilot pushes the stick forward to descend, the aircraft will also turn to the left. Other inputs will show a similar reaction. This effect could to a certain extent be counteracted by rudder deflection; higher powered rotaries however were too much for the relatively light aircraft of the time, causing many accidents mostly during take off and landing. The most powerful rotary was the 240hp Bentley BR-2.

The Early Birds rotary engines
Early Birds are proud owners of several rotary engines, in working order as well as in restoration. Nearly all are on display in the hangar and the 80hp LeRhone and the 50hp Gnome are run regularly during events on Lelystad airport, invariably drawing a crowd with their distinctive sound, so very unlike any other aircraft engine.