Jaap van Mesdag, founder of the Early Birds Foundation, was a colourful person. An exceptionally modest man who fully lived by his motto ‘Actions speak louder than words’.

Born in 1922, Jaap studied medicine when in May 1940 Germany invaded The Netherlands. Wanting to become a fighter pilot in the RAF to ‘help to kick the Jerries out’ he, together with a friend, tried to escape to Britain in a canvas canoe. When the weather turned bad and the canoe quickly filled with water, Jaap used his trumpet to attract attention of ships whose silhouettes could be seen in the distance. One of the ships responded to the SOS-signal, turned towards them and rescued them from the ice-cold water. Unfortunately, it turned out to be a vessel of the German Kriegsmarine. A long time in captivity followed and by the time Jaap was finally liberated in Dachau, he had been imprisoned for 32 months and seen the inside of no less than three concentration camps.

After the war Jaap became a passionate sports pilot. In 1967 he made the national news by becoming the first Dutchman to fly solo across the Atlantic Ocean in a single engined aircraft. With this ocean crossing – at a time when GPS was non-existent and pilots had to rely on the assistance of weather ships for navigation – he again lived up to his motto. ‘I hope others will succeed’, he encouraged his fellow sports pilots. ‘It can be done. It can be done safely and sensibly.’

In the aviation world Jaap undoubtedly became best known for his passion for vintage aeroplanes. In the 1970’s he started to collect light aircraft from the First World War and the Interbellum, just when these planes were rapidly disappearing from the sky. ‘Incredible what already has been thrown away and what little interest people have in our Dutch flying heritage’, he then remarked. Jaap had a strong determination to bring these aeroplanes back into the air and show them to the public at airshows and fly-ins. 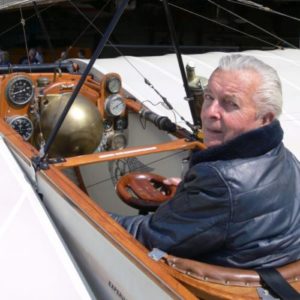 Over the years Jaap managed to form around him a group of enthousiasts who had the technical skills to help him to restore the increasing number of historical aircraft of the Early Birds Foundation. Together, they aquired a unique set of skills , which enabled them to bring completely wrecked planes back to flying condition and even build new replicas. Even at a very high age Jaap remained at the heart of the foundation. In fact, as many volunteers would say, Jaap was the foundation.

Although during the last couple of years of his life his health slowly deteriorated, he still loved to visit the Early Birds-hangar. Even when he could only slowly move around behind his walker his presence continued to give meaning to his life and inspire other volunteers. Jaap finally passed away in October 2015, aged 93. At his funeral three Fokker S-11’s of the Fokker Four Foundation together with the Early Birds’ Tiger Moth performed a missing man formation. During the flypast, the Tiger Moth – the Early Birds Foundation’s very first airplane – peeled away in remembrance of the man who has inspired so many others with his ‘can do’ attitude. Since then the Early Birds-volunteers have continued to expand the collection in this spirit.