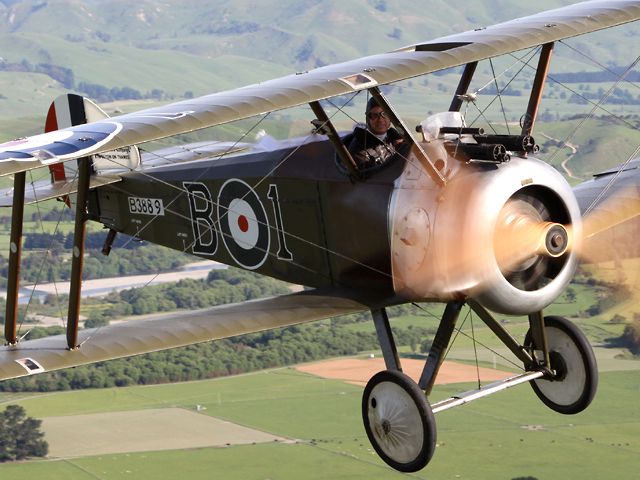 Controversy over whether the Sopwith Camel or the Fokker D-VII was the finest aircraft of World War I will probably always persist but the Camel is undisputedly champion in terms of enemy aircraft destroyed, its tally during only sixteen months of operation being 1,294 victories.
Developed from the Pup the Camel was originally designated Sopwith Biplane F1. The prototype and some production batches were powered by the 100 hp Le Rhone rotary; others had 100 hp Gnome Monosoupapes, 130 hp Clergets and even 150 hp Bentley Rotaries. The short nose and stocky fuselage with the ‘hump’ machine gun cover led to the nickname Camel, later adopted officially. Due partly to the concentration of all heavy items of equipment within a compact space and aided by the pronounced torque of its big rotary engine, the Camel proved to be one of the most manoeuvrable aircraft ever built, a factor that contributed immensely to its combat successes. Part of its fame originates from the fact that the great “Red Baron” Manfred von Richthofen was killed when his Fokker DR-I was shot down by a Camel. Recent research (1970, 1998) however disputes the accuracy of this statement.