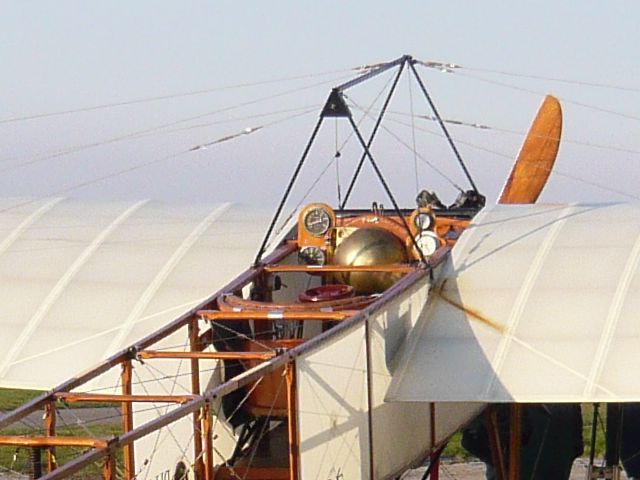 On 25 July 1909 Frenchman Louis Blériot instantly made himself world famous by crossing the English Channel from Calais to Dover in his self constructed monoplane, winning the prize of £ 1000 for the first pilot to cross the Channel between sunrise and sunset.
His flimsy aircraft was fitted witha 25 hp Anzani 3 cylinder engine. Many airshows in the early days of aviation and French pilot Pegoud making the first looping made Bleriot aeroplanes familiar with the general public.
The type XI became one of the first military planes to appear in WW I. Operational until October 1914 the planes were mostly single-seaters but a two-seater version was built with a 70 hp Gnome rotary engine.

The Early Birds Blériot XI
The “Early Birds” Bleriot XI bears the Dutch registration PH-BLE and was built as ‘homebuilt’ project nr. 78 under supervision of the NVAV*. This aeroplane is a reconstruction built by “Early Birds” to original specifications and using as many authentic materials as was practical. It is powered by a 3-cylinder 45 hp Lenape Papoose engine. The original plane was fitted with a now very rare 25 hp Anzani 3 cylinder which for obvious reasons was not available. Fuselage woodwork is ash with steel bracing wires. The aircraft has made several flights preparing for the commemorative Channel flight, celebrating the first Channel crossing by Louis Blériot 100 years ago.