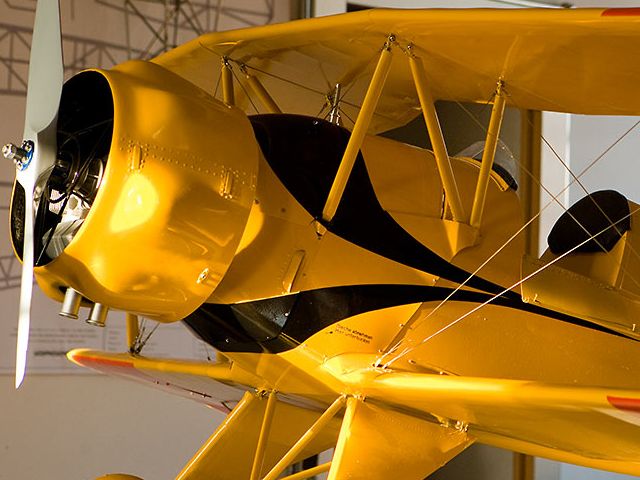 During the late thirties of the previous century the world of aerobatics was largely dominated by the Bücker Jungmeister. In the turbulent interbellum aviation in Germany was severely hampered by the Versailles Treaty. This was the environment in which numerous flying clubs came into existence, training the men who would later pilot the German fighters and bombers. And it was the scene in which the Bücker Bü.133 Jungmeister was born, an aircraft that was already a legend in its own time and the basis for later aerobatic aeroplanes. The Jungmeister was produced by Carl Bücker from 1935 onwards and was based on the well known Jungmann, with which it shared many interchangeable parts. The fuselage was constructed of steel tubing and linen, wingspars and ribs were wood, also fabric covered. Upper and lower wing panels were similar and interchangeable.
The very light and well balaced controls made the plane very agile and responsive to its pilots commands. Needless to say that pilots absolutely loved the plane for its delightful properties. After cessation of hostilities in 1945 the Jungmeister was produced for a while but prohibitive production costs and corresponding retail price soon led to the emergence of other aerobatic aircraft like the Pitts and the Zlin and the termination of serial production. The majority of Jungmeisters was built in Munich, Germany, but production lines also existed in Switzerland and Spain. Even as late as 1970 new Jungmeisters were built with old tooling. Of the original Jungmeisters some 150 survived, with about 30 in flying condition.