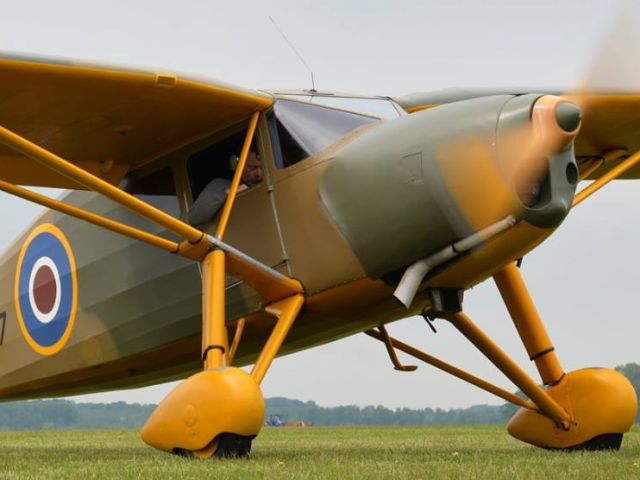 The Fairchild 24 emerged in 1932 and was originally designed to carry two people sitting side-by-side. The concept was rather successful; several civilian and military versions were developped with a choice of inline or radial powerplants. The original 1933 production 24C-8-C used a 145 hp Warner radial. The next thirteen years the model remained virtually unchanged but a third seat was added and in 1937 a fourth. The United States Airforce operated a number of C-61’s and UC-61′ which were named Forwarder. The Navy counterparts were GK-1 and JK-1 while the Coast Guard used the J2K. The British Royal Air Force had a number of Fairchilds under Lend-Lease contracts, naming them Argus.
With it’s characteristic outrigger gear and Ranger or Warner powerplant, the F-24 is ready made antique. Some call it the “prettiest ugly plane”. It is hump-backed, bowlegged and squats tail down but there is something appealing about the lines and angles in the landing gear and the multi-facetted windshield. Despite the fact that the last “24” left the factory in 1946 it still is plentiful because the military bought over a thousand. Since government policy was: buy one airplane and spares for fifty, spares are available and relatively cheap.