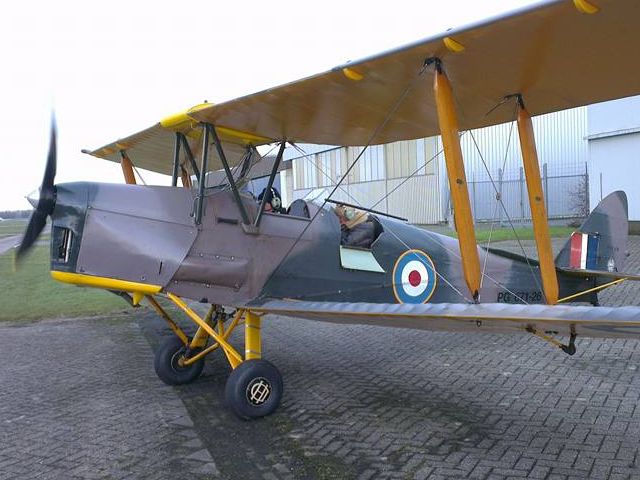 Doubtless the Tiger Moth is one of the best known biplanes in aviation history. Its friendly flight characteristics, generous cockpit space, ease of landing and conventional construction techniques made it a very popular training aircraft. Developed for the Royal Air Force from its forerunner, the “Gipsy Moth”, the Tiger made its maiden flight in 1931.
At first glance the Gipsy and the Tiger are more or less identical but a closer look reveals some constructional differences. Notable are the staggered wings, the top wing is placed slightly forward of the lower, which enabled the flight instructor riding in the front cockpit to abandon the plane easily in case of trouble (with a parachute of course). Typical for the Tiger are the external rudder cables and the rather thick wing cross section. Powerplant is a De Havilland “Gipsy Major” generating 145 hp. Doing its job ‘upside down’, with its cylinders hanging down from the crankcase, it allowed a far better forward view than in the Gipsy Moth.
The Tiger Moth became the best known British training aircraft of World War II and was operated by numerous flying schools in England, Canada, Australia, Rhodesia, South Africa and India. It also was the major postwar basic trainer for the Dutch armed forces and the Rijksluchtvaartschool, the governmental school of aviation.
As a result of several towing accidents the Dutch government ordered a modification for the Tiger, enlanging the standard vertical fin thus improving directional stability. Later this horrible mutilation of the The Tiger’s profile was abandoned.
Following its operational life the aircraft was extensively used as an agricultural aircraft and for banner towing.