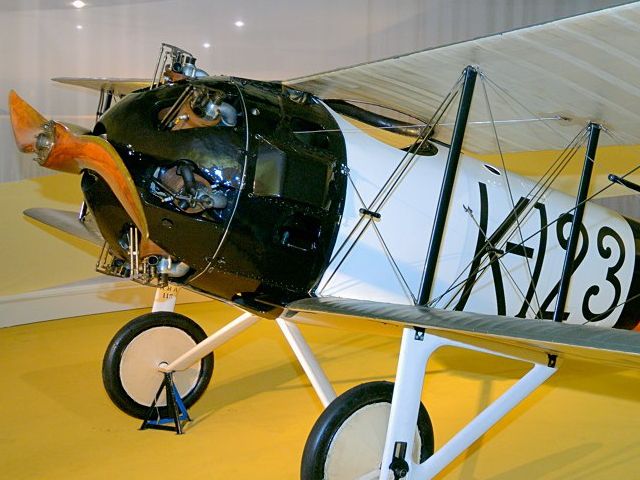 During the First World War Frits Koolhoven, dutchman by birth, worked as a designer for several aircraft factories, ending up with BAT in London in 1918. After a number of preliminary designs he produced the BAT FK23 Bantam with the all new 170 hp. ABC Wasp engine. This was a tiny fighter for which expectations were very high. Compared with this plane and its engine the opponents aircraft were at least 50 percent heavier.
A prototype-series of 12 aircraft were ordered by the Royal Air Force. The first three were delivered in the summer of 1918. Throught its testflights the aircraft to performed very satisfatory but the engine proved to be its weak spot and had to be replaced regularly. ABC had noticed this and already worked on an improved version.
Koolhoven had nearly convinced the allied forces to decide for the FK23 as their standard fighter but the end of hostilities led to the dissolution of all contracts. The RAF completed construction of two but the factory was left with the remaining aircraft for which it tried to find a market by participating in displays and airraces.
As Koolhoven had several contacts in the Netherlands, he was able to show his aircraft at the 1919 Amsterdam ELTA (abbreviation for First Aviation Display Amsterdam). One aircraft was on static display, another gave several spectacular demonstrations daily. A third was added later which incidentally was kept as private property by Koolhoven after the ELTA closed.
In 1922 Koolhoven became chief constructor for the newly founded Dutch Aircraft Industy (NVI). On Rotterdam’s Waalhaven airport testflights with the improved Wasp engine were made to obtain a certificate of airworthiness. The aircraft was offered to the Dutch airforce but this did not result in any orders. By that time ABC decided not to continue development of the Wasp engine.
Following the demise of the NVI in 1926 Koolhoven started an aircraft factory under his own name, which was to become the second largest in the Netherlands, Fokker leading the ranks. Customers ar the Dutch Airforce, KLM and several foreign companies. Just before the 2nd World War brok out, Koolhoven signed a huge contract with the French Airforce. The aircraft were partly completed but sadly never delivered. The Rotterdam Waalhaven factory was completely bombed during the May invasion of German troups and never rebuilt. Some Koolhoven aircraft have seen service during and after the war but none have survived.