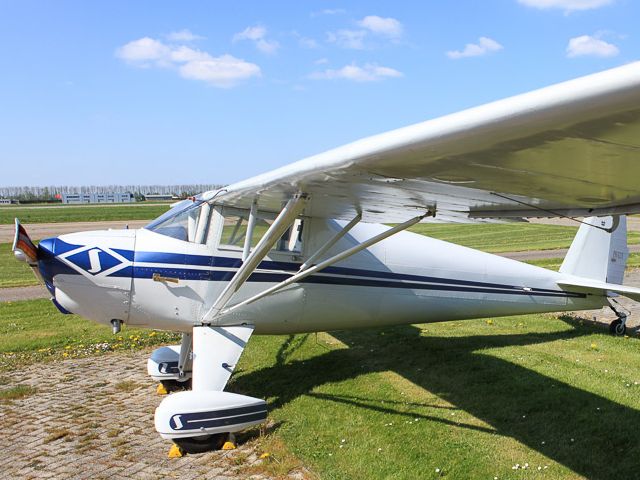 After having designed and built the high-wing Monocoupe, Don Luscombe started his own aircraft production company in the thirties of the 20th century. Being convinced that the future for light aviation lay in all-aluminium construction, he developed his Model 8, later to become known as the “Silvaire”. The Model 8 was the first commercially successful all-metal light airplane. By the time the war practically shut Luscombe down, the airplanes were selling extremely well, a fact not lost on Cessna when they began post-war production of the 120/140.
The first production models had fabric covered wings but a stressed skin aluminium version was available soon after and later became standard although the rag wing remained as an option until 1947. Engines varied from the initial 50 hp to the 90 hp Continental in the later types 8F, 8G and T8F. Prewar publicity pictures showed the Silvaire with twenty-one people sitting on the wings, intended as a proof of the strength of the all-metal construction technique. As most aircraft at the time were made of wood and linen, new constructions were eyed with suspicion. Don Luscombe proved that his novelty had prospects; to this day the majority of aircraft are of all-metal construction.

After World War II the light airplane market was saturated with bargain-priced surplus army Piper Cubs. That proved a problem to the Luscombe Aircraft Corporation seeing the number of new orders decreasing. They saw an opportunity in a military observation version of the “Silvaire” and produced a tandem-seat model, designated the T8F, with a large plexiglass bubble behind the wing. However the military were not really interested in Luscombe’s offering so the T8F was only produced in small numbers for civilian use. The company struggled on for a few years until in 1961 production finally came to a halt.
During the final years of its existence, Luscombe produced the four-seater Model 11 Sedan which achieved little commercial success. A limited number survived.