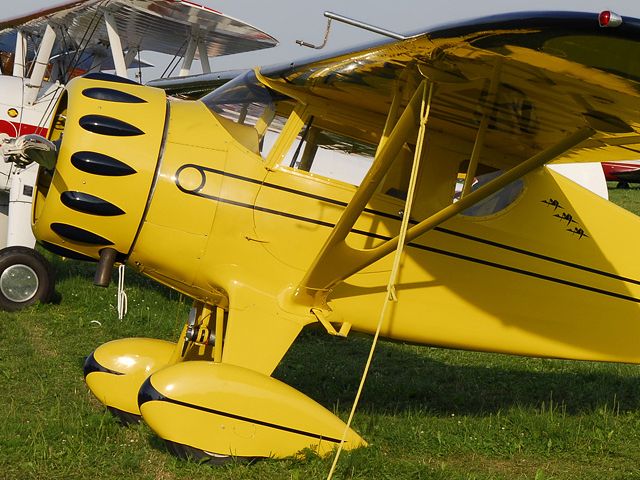 The Velie “Monocoupe” is one of the first aircraft specifically manufactured for the sports pilot. The planes were constructed by MONO AIRCRAFT Corporation of Moline, Illinios, a company which was founded by W.L. Velie, an industrialist who had previously specialized in carriages and cars.
Don Luscombe and Clayton Folkerts built the first Monocoupe in 1926. Don wanted a more comfortable plane than his open cockpit “Jenny”. Together, Don and Clayton launched a type of aircraft that dominated the light plane scene for several years.
Production of the Monocoupe was sporadic until 1928 when the company became associated with W. L. Velie. Velie brought the Monocoupe a reliable source of small engines, initially powering the Monocoupe with its new 62 hp. 5-cylinder radial with aluminium cylinders and sodium filled valves
The Monocoupe had an enclosed cockpit for maximum comfort, was fast, reasonably stable and very responsive on the controls. In the 1928 National Air Races in Los Angeles the VELIE MONOCOUPE scored its first victory in close-course racing averaging over 100 mph against competition flying aircraft with 90-100 hp. engines.
The Monocoupe could seat two people and its enclosed cabin, speed and flashy style made it quite popular. By 1929, approximately ten percent of all licensed US aircraft were Monocoupes. The Monocoupe accumulated a good safety record and promoted longevity. About 870 Monocoupes were built and they were advertised as “the ultimate plane for the private flyer”.
Shortly after W.L. Velie’s sudden demise in October 1928, and within four months Velie’s son, the company was sold and production was continued on a new location in St Louis under the name Monocoupe/Lambert Engine & Machine Corporation until production finally ceased in 1950.

Monocoupe Model 110
In 1930 the Monocoupe Model 110, powered by a 110 hp Warner Scarab, was introduced. Designed for the novice as well as for the professional pilot. Advertised as the plane to travel fast and in comfort and easy to fly and land, costing $ 4,485,–. A metal propeller and 6.5″ x 10″ semi-air wheels came standard, with optional Townend Ring, Wheel pants, Heywood engine starter, Battery, and Navigation lights.
The cabin interior was revolutionary in its care for details, the vast baggage compartment, the complete instrument panel, its spacious seats with soft upholstery. Life in the Monocoupe was to be a pleasure. The radial Warner powered Monocoupe with its sleek appearance represented power, speed and maneuverability. No wonder it was popular.

The model 110 (110hp/125 hp Warner) has the same primary structure compared to the Model 90 by using the basic steel tube layout fuselage and tail. The monowing is constructed of wooden spars and ribs. Though the earlier models performed very well, the 110 with its more powerful engine did so quite astonishing breaking the official speed record with 3.84 mph.
Mono Aircraft sold 5 Monocoupes 110 with a 110 hp Warner Scarab and 5 with a 125 hp Kinner B5 engine, naming it the Model 125. In addition 7 were produced with the 145 hp Warner Scarab as the Model 110 SPL.

Various models and engines
The first Monocoupes were built in a disused church and flew on the 1st of April 1927. Initially designed by Don Luscombe the planes were engineered and developed by Luscombe en Clayton Folkerts. 870 planes were built in 17 models between 1926 and 1950; about 115 survived of which some 30 in flying condition. In its early days several engines were tested. A French 60 hp Anzani, the Detroit Aircat, even a British Cirrus and a German Siemens-Halske found their way into the Monocoupe’s nose before it was decided to power the Model “70” by the 55 hp Velie. Mora than 350 Velie powered Monocoupes were manufactured. More recent models used Kinner, Warner, Lambert and Franklin engines..